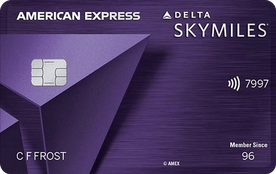 The Delta SkyMiles Reserve American Express Card helps frequent fliers climb the Delta Medallion ladder more quickly and make flying more comfortable and convenient; but aside from a companion pass every year, it doesn’t offer nearly as many perks as its competitors.

If you’re a frequent Delta flyer, the upscale Delta SkyMiles Reserve American Express Card will help you climb the Delta Medallion ladder more quickly and claim exclusive benefits, such as unlimited complimentary seat upgrades, free checked baggage and priority boarding. However, if you’re willing to spend three figures on an annual fee, you may be able to get more value from a super-premium card that offers stronger perks, such as the American Express Platinum card or the Chase Sapphire Reserve card. You could also enjoy some of the same benefits as the Delta Reserve card – such as priority boarding and waived baggage fees — with a smaller price tag by opting for a lower tier Delta card such as the Delta SkyMiles® Gold American Express Card.

The Delta Reserve card’s benefits are relatively limited for a card of its caliber and its rewards rate is anemic. But it does offer some exclusive air-travel-related benefits – including a companion seat every year and special treatment for frequent fliers — that could make the card’s $550 upfront fee worth it for certain travelers. The Delta Reserve card’s value also skyrockets the more you spend thanks to its tiered bonus program. So, if you fly Delta often enough and expect to charge at least $2,500 a month, the premier Delta Reserve could be a good fit. Here’s what to consider if you’re thinking about applying for a Delta Reserve card:

The biggest selling point for the Delta Reserve card is its ability to make your Delta flights more comfortable and convenient – as well as more rewarding. In addition to an 80,000-mile introductory bonus for cardholders who charge at least $5,000 in the card’s first three months, the Delta Reserve card also awards cardholders 20,000 Medallion Qualification Miles (expires 4/1/2020).

Plus, if you spend at least $30,000 in a calendar year – roughly $2,500 a month – you’ll earn another 15,000 Medallion miles, up to four times per year. If you’re an especially heavy spender and use your Delta Reserve card for all or most of your purchases, you could potentially earn a ton of MQMs.

A good way to upgrade the quality of your flights

Additional Medallion miles may not appeal to everyone. But if you’re a frequent Delta flier, you know just how valuable those Medallion miles (known in Delta lingo as MQMs) can be. If you’re just beginning your frequent flier status with Delta, a 10,000-mile boost could help you reach Silver status and qualify for a larger miles bonus each time you fly.

You’ll also receive unlimited free seat upgrades for yourself and one traveling companion, a free checked bag for yourself and up to eight other traveling companions (which is a nice perk for big families), priority check-in and more. The higher the Medallion ladder you climb, the better the benefits will be. For example, Platinum Medallion members get a free voucher for Global Entry status so they can zip through security lines more quickly, a $200 Delta gift card and a $200 gift card for the luxury jeweler Tiffany & Co.

Just a handful of high-value perks

The Delta Reserve card doesn’t offer a ton of high-value perks on its own, though, which can make it tough for this card to compete with similar cards with equally high annual fees. The Reserve card’s most valuable benefit is its round-trip companion certificate that cardholders receive each year. Depending on where in the United States you fly (the ticket must be domestic) that perk alone could be worth several hundred dollars, wiping out the cost of the annual fee.

If you’re a frequent Delta traveler who’s just looking for a card to help you upgrade your Medallion status, the card’s companion certificate could make the card’s high annual fee worth it since you’ll essentially be earning that money back each time you renew your card. In addition, Delta cardholders get free access to Delta SkyClubs and a lower entry rate of $39 for up to two traveling companions.

The Delta SkyMiles Reserve American Express Card offers a fee credit for Global Entry of TSA PreCheck, as well as complimentary Delta SkyClub when traveling on a Delta flight and complimentary Centurion Lounge access when you book your Delta flight with your Reserve card.

While not quite as impressive as the Chase Sapphire Reserve card — which offers a $300 annual travel credit every year that you can also use for airplane tickets, up to a $100 fee credit for Global Entry or TSA Precheck and doesn’t charge your traveling companions for lounge access –these perks are quite respectable and help justify the high annual fee.

Other cards to consider include the Platinum Card® from American Express, which offers comparably lush perks, plus access to a wider selection of airport lounges, up to $200 worth of Uber credits and a $100 resort credit, and the Citi Prestige card, which offers a fourth night free hotel benefit that can add up to thousands of dollars’ worth of savings for heavy travelers.

With such a low rewards rate, it could be tough for you to rack up enough miles to earn a significant number of free flights. As you climb the Delta Medallion ladder, you’ll earn more miles for Delta purchases. But you may have a hard time justifying using this card for everyday purchases – particularly since there are so many other cards available that award significantly more points for popular purchases, such as gas, restaurants and groceries. You don’t even have to pay an annual fee, for example, to earn 1.5 miles on every purchase, or 2 percent cash back, depending on the card.

Not wanting to use this card for everyday spending could also limit the value of your Delta Reserve card since it heavily favors big spenders. American Express has set up a tiered rewards system that provides the most value for cardholders who charge at least $30,000 to their cards, thus raking extra Medallion Qualification miles. If you only use your card to pay for flights, you may not be able to meet that relatively high threshold – unless you fly several times a month and regularly charge more than two thousand dollars a month on travel.

To get the most out of this card, you need to be a loyal Delta flier who strongly values the extra perks that being a Delta Medallion member can provide.

Why get the Delta SkyMiles Reserve American Express Card?

How to use the Delta SkyMiles Reserve American Express Card:

For rates and fees of the Delta Reserve card, please click here.

For rates and fees of the Platinum Card from American Express, please click here.

CreditCards.com is an independent, advertising-supported comparison service. The offers that appear on this site are from companies from which CreditCards.com receives compensation. This compensation may impact how and where products appear on this site, including, for example, the order in which they may appear within listing categories. Other factors, such as our own proprietary website rules and the likelihood of applicants' credit approval also impact how and where products appear on this site. CreditCards.com does not include the entire universe of available financial or credit offers.
CCDC has partnerships with issuers including, but not limited to, American Express, Bank of America, Capital One, Chase, Citi, Discover and Wells Fargo.