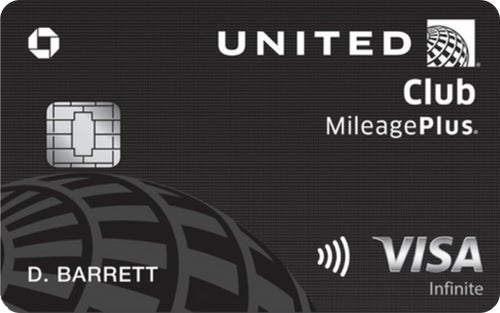 Frequent flyers looking to earn United miles and enjoy premium perks can get a lot of value out of this card thanks to its impressive rewards rate. That said, the annual fee will be hard to justify if you’re not a die-hard United fan.

Ideal for United loyalists who place a high priority on perks like airport lounge access, the United Club℠ Infinite Card comes with an impressive sign-up bonus and a respectable rewards rate on both United purchases and general travel spending. Indeed, the card’s earning rate for flights booked with competing airlines stands out among airline credit cards.

That said, the Club Infinite card’s enormous annual fee may be tough to swallow for the average traveler. Unless you place a high priority on United-specific perks and do nearly all of your traveling on United or with one of its Star Alliance partners, you may better off with a luxury travel card that offers more flexible redemption.

The United Club Infinite Card was recently updated with a new sign-up bonus, and though its a bit of a drop from the card’s last offer, it still carries a good value. You can now earn 80,000 bonus miles after you spend $5,000 on purchases in your first three months. This is a 20,000-mile drop from the card’s previous sign-up bonus (which offered 100,000 miles with the same spending requirement). We estimate these miles are worth approximately $880 in airfare if you redeem all your miles for United travel (assuming an average United mile value of 1.1 cents per mile, based on Bankrate’s valuations).

The United Club Infinite Card gives you more ways to earn bonus miles on your spending than the average airline credit card.

You’ll earn 4 miles per dollar on United® purchases (including tickets and inflight purchases like food, beverages and Wi-Fi), which is double the rate offered by most airline cards on direct bookings. The lower-cost United Explorer Card, for example, only offers 2 miles per dollar spent on United flights.

What’s more, the card also earns 2 miles per dollar on all other travel, including flights booked with other airlines. This is impressive given that many co-branded airline cards, including the American Airlines AAdvantage credit cards, only offer bonus rewards on airfare purchases that are made with directly with the airline.

In addition to its bonus on United flights and general travel, the Club Infinite card offers 2 miles per dollar on dining and food delivery and 1 mile per dollar on all other purchases

The Club Infinite card’s rewards rate on general travel and dining helps boost the card’s overall earning rate and should be very appealing to frequent travelers who want to earn United miles while still having the flexibility to book with other airlines.

According to our estimates, the average cardholder will earn a little over $300 worth of United miles per year via card spend with the Club Infinite card. This assumes an average rewards rate of 1.34 miles per dollar, a mile value of 1.52 cents per mile and an annual spend of $15,900 (based on data from the Bureau of Labor Statistics).

United miles are pretty flexible and can also be used for booking with one of the airline’s 28 Star Alliance partners. Other United redemption options like hotel bookings, car rentals and cruises will usually force you to sacrifice mile value.

That said, a travel card that offers transferrable points or miles could give you even more booking flexibility and help you rack up miles more quickly.

For example, take The Platinum Card® from American Express, which gets you 5 points per dollar on all flights booked directly with an airline or with American Express Travel (on up to $500,000 on these purchases per calendar year). If you were to spend $5,000 per year on such travel, you’d earn 25,000 Amex Membership Rewards points. Even if you only booked with United, the Club Infinite card would earn just 20,000 United miles on a $5,000 spend.

Though United itself is not an Amex transfer partner, you could transfer your Amex points to one of United’s eligible Star Alliance partners (Singapore Airlines KrisFlyer, Air Canada Aeroplan and ANA Mileage Club) at a 1:1 ratio and use them to book flights with United.

The United Club Infinite Card charges an annual fee of $525 per year, over five times that of the United Explorer Card. Budget-conscious cardholders may balk at such a high fee, but the card’s impressive ongoing rewards rate, sign-up bonus and lounge access perks can make the annual fee worth it for United loyalists who value luxury travel. Just be sure you’ll make use of the card’s benefits and don’t mind limiting your rewards to flights on United and its partner airlines; otherwise, the fee will be hard to justify.

Despite its annual fee, the Club Infinite card offers decent first-year value. However, its high fee also means it could fall short of the much cheaper United Explorer card. Based on our estimates of the average person’s spending and subtracting the annual fee, the Club Infinite Card will likely earn around $589 worth of United miles in the first year, compared to the United Explorer card’s $870. This assumes a mile value of 1.1 cents per mile and an annual card spend of $15,900.

This gap widens significantly in year two, when sign-up bonuses are no longer in play. Based on our model of the average cardholder and accounting for the annual fees, we estimate around $115 in annual earnings with the United Explorer card while the Club Infinite card will end up costing the average cardholder about $291 per year (if you ignore the value of the card’s perks). As a result, the card’s luxury perks – especially the included United Club membership – will be make-or-break for prospective applicants.

United Explorer Card is currently offering 50,000 bonus miles after you spend $3,000 on purchases in the first three months

United Club Infinite Card is currently offering 80,000 bonus miles after you spend $5,000 on purchases in the first three months

As its name implies, the United Club Infinite Card’s included United Club membership is one of the card’s biggest selling points. United Club lounges feature complimentary beverages and snacks, free Wi-Fi and more. Without the Club Infinite card, a membership would cost you $650 per year or 85,000 miles per year.

Along with its generous ongoing rewards and lounge access, the Club Infinite card gets you a number of compelling travel perks, including:

These perks are respectable, but the lack of annual travel credits in particular keeps the Club Infinite card out of the upper echelon of luxury travel cards. Several cards with a comparable or even lower annual fee offer travel credits of $200 or more. Even the United Business Card offers a $100 travel credit each year you make seven United travel purchases of $100 or more.

The United Club Infinite Card also offers a number of other benefits and consumer protections in addition to its United-specific travel perks, including:

How does the United Club Infinite Card compare to other rewards cards?

The United Club Infinite Card lets you earn bonus miles at a great rate on United purchases, general travel and dining, but redemption is limited to United and its partner network. If you’re looking for a bit more flexibility but don’t want to sacrifice ongoing rewards and luxury perks, there are a few alternatives worth consideration:

The Chase Sapphire Reserve offers a credit of up to $100 toward the cost of a TSA Precheck or Global Entry application, complimentary Priority Pass lounge access and a flexible $300 travel credit you can use for airfare, ride-shares, parking garages, bus tickets and much more.

The Platinum Card from American Express

The Platinum Card from American Express is packed with travel credits and protections that make it a valuable option for frequent travelers, including an up to $100 statement credit for Global Entry/TSA PreCheck and up to $200 per year in Uber Cash ($15 per month, plus an extra $20 in December for U.S. rides and eats). You’ll also enjoy Priority Pass lounge access and an impressive 5 point-per-dollar rewards rate on flights booked directly with airlines or with American Express Travel (on up to $500,000 on these purchases per calendar year) and 5 points per dollar on prepaid hotels booked with American Express Travel. The major downside is that its rewards rate makes it hard to earn points on non-travel purchases.

The Citi Prestige card offers a whopping 5 points per dollar spent on both restaurants and air travel, as well as a fourth night free at any hotel up to twice a year. The card also comes with a generous sign-up bonus, Priority Pass lounge access and an annual $250 travel credit, all of which should be more than enough to offset the card’s annual fee (which is still lower than that of the United Club Infinite Card). You can book flights with United through the Citi travel portal or transfer to one of 15 Citi ThankYou transfer partners at a 1:1 ratio.

Why get the United Club Infinite Card?

How to use the United Club Infinite Card

Is the United Club Infinite Card worth it?

Only if you value luxury perks long-term. Though it offers an impressive sign-up bonus, the Club Infinite card’s extremely high annual fee will be hard for most cardholders to justify. Unless United Club access and other United benefits are a top priority, you’ll likely be better off sticking with the more affordable United Explorer card, especially given its comparable sign-up offer and waived first-year annual fee.

*Information about the Citi Prestige Card has been collected independently by CreditCards.com. The issuer did not provide the details, nor is it responsible for their accuracy.