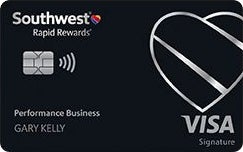 Despite a high annual fee, the Southwest Rapid Rewards Performance Business card packs enough value to make it the best of all Southwest cards.

*The information for the Southwest® Rapid Rewards® Performance Business Credit Card has been collected independently by CreditCards.com. The card details on this page have not been reviewed or provided by the card issuer.

The card is so laden with perks and point-earning potential, that you can easily make up the fee each year. Read on to see why the Rapid Rewards Performance card may be the best way to fly on Southwest:

Even though it’s down from the card’s previous offering, the Southwest Performance Business card’s current sign-up bonus is still a great incentive to apply for the card. New cardholders earn 80,000 Rapid Rewards points after they spend $5,000 on purchases in the first three months. This is the largest bonus currently available on any Southwest card, and it’s very valuable — worth around $1,200 in Southwest airfare by our estimates.

The Southwest Performance Business card also awards 9,000 points to cardholders each year on their card member anniversary. Worth around $144 in Southwest airfare, the annual bonus covers most of the card’s $199 annual fee.

What are points worth?

Adding to the Southwest Performance card’s value is the fact that Southwest points are fairly valuable. By our estimates, Rapid Rewards points are worth around 1.6 cents per dollar when redeemed for a Wanna Get Away fare on Southwest.

When you combine the Southwest Performance Business card’s higher-than-average earning rate with its high point value, this amounts to a lot of earning power — we estimate that the average business owner can earn 1.79 cents worth of Southwest airfare per dollar spent. Comparing this rate to other business credit cards, we find that the Rapid Rewards Performance card beats out most other airline cards, including the Southwest® Rapid Rewards® Premier Business Credit Card*:

On the other hand, the Rapid Rewards Performance card doesn’t offer quite as much value per dollar as some general travel cards, such as the American Express® Business Gold Card and The Business Platinum Card® from American Express. These cards may be the better way to go if you want to rack up flexible points that you can use on other airlines besides Southwest.

On the plus side, Rapid Rewards points are one of the most flexible and simple airline currencies on the planet. Your points don’t expire and there are no blackout dates or limits on how many points you can collect. As long as there is a seat available on a Southwest flight, you can purchase it with points.

In other words, for frequent flyers who prefer a rewards program without a lot of complexity, Southwest makes it very simple to redeem your points and to determine how to redeem your points to get the best value: In most cases, if you redeem for a Wanna Get Away fare, you’re in good shape.

In addition to flights, Southwest offers a few other redemption options. However, you’re best off avoiding these, as they offer a very poor return on your points:

An easier way to earn the companion pass

The Southwest Companion Pass — which allows you to bring a designated companion with you for free on any Southwest flight — is one the best perks of the Southwest Rewards program. The requirements are steep, however: Currently, you need to earn to earn 125,000 points in a single year to qualify for the pass.

The good news is that the sign-up bonus from the Performance Business card counts toward the pass. Just by earning the sign-up bonus, you’ll get at least 85,000 Rapid Rewards points (80,000 from the bonus itself and at least 5,000 via card spend from meeting the spending requirement). That should give you a great leg up as you pursue the Companion Pass.

See related: How to get the Southwest Companion Pass

The Southwest Performance card comes with a couple more perks than its counterpart — The Southwest Business Premier card — including four upgraded boardings per year and a credit for your Global Entry or TSA Precheck application. Here’s a run down of the most notable benefits:

Who should apply for the Southwest Performance Business card?

How to use the Southwest Performance Business card

Is the Southwest Performance Business card worth it?

On the other hand, if you aren’t a frequent flyer on Southwest, you may be better off with a flexible points card such as the American Express Business Gold Card or the Business Platinum Card from American Express. Visit our business credit cards reviews to get a view of your options.

*The information for the Southwest® Rapid Rewards® Premier Business Credit Card has been collected independently by CreditCards.com. The card details on this page have not been reviewed or provided by the card issuer.