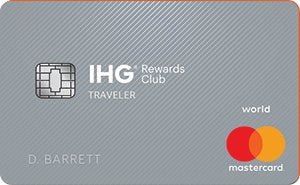 The IHG Rewards Club Traveler card is a decent card for IHG loyalists, but it doesn’t offer much in the way of perks.

While the IHG Rewards Club Traveler card comes with a decent sign-up bonus and decent rewards rate on IHG hotel stays, it doesn’t pack in nearly as many extra benefits as the IHG Rewards Club Premier Credit Card. Despite having no annual fee, its perks fail to impress.

The IHG Rewards Club Traveler card comes with a fair good sign-up bonus of 60,000 bonus points if you spend $2,000 in the first three months. Though this is down from the card’s previous offer of 100,000 bonus points after spending $2,000 in the first three months, it’s at least a pretty easy spend threshold to reach, and should be enough for a reward night in a mid-tier IHG property.

Unfortunately, IHG points are not worth as much as the average rewards point. When redeemed for reward nights, we value IHG points at around 0.55 cents per dollar. So while the 60,000-point sign-up bonus and 15-points-per-dollar total IHG stay rewards rate sound impressive, they are actually worth less than similar rewards cards.

IHG has plenty of available properties, with more than 5,600 locations. While not quite as large as networks like Hilton or Marriott, IHG still has hotels in cities around the world – ranging from midlevel hotels to luxury resorts. No matter your budget, IHG Rewards Club cardholders can find a property that meets their needs.

You can still earn plenty of hotel rewards points at a decent rate with the IHG Rewards Club Traveler card, but frequent travelers who can take advantage of extra perks are better off biting the bullet and paying an annual fee for the IHG Premier card.

Why get the IHG Rewards Club Traveler card?

How to use the IHG Rewards Club Traveler card?