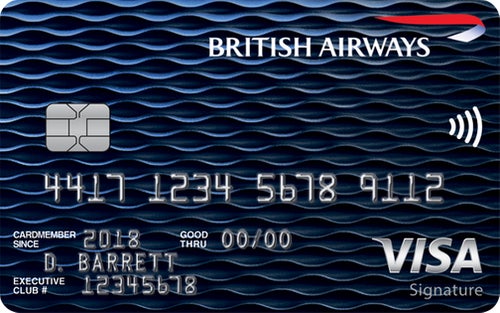 One of the best airline cards on the market, this super charged premium card offers frequent transatlantic flyers an accessible sign-up bonus that amply rewards heavy spenders, a plentiful point bonus on airfare, valuable travel perks and generously priced rewards points that are worth more than twice the average credit card rewards point.

You might not like the $95 annual fee, but if you love saving money on travel, the British Airways Visa Signature Card from Chase is worth the price of admission. The annual fee is a small investment, considering what you get out of this product. Such perks include an excellent sign-up bonus and great earning scheme. Plus, you get one of the best frequent flyer programs in the world, with a global reach that goes beyond flying on one airline. No matter where you go in the world, Avios – the British Airways Executive Club currency – will help you get airborne even if British Airways doesn’t fly there.

Not everything about the British Airways Visa Signature Card –and the airline itself –is peachy, but savvy globetrotters know how to thrive on the “good” and steer clear of the “bad.” You can use Avios on other airlines around the world, including American Airlines in the U.S. and Canada, Alaska Airlines to fly to Hawaii, LAN Airlines in Latin America; British Airways or Aer Lingus in Europe, Cathay Pacific in Southeast Asia, Japan Airlines in Japan, and Qantas Airways in Australia.

If you don’t mind doing some research, you can learn how to redeem Avios wisely. This helps you  maximize the benefits and minimize the cost. Redemption begins with just 4,500 Avios, or 7,500 Avios for flights originating or terminating in the U.S.

British Airways is currently offering a very large sign-up bonus: You can earn up to 100,000 Avios – 75,000 Avios after you spend $5,000 within the first three months, plus an additional 25,000 Avios after you spend $20,000 in the first 12 months. While the spending requirement for earning all 100,000 Avios is quite high, British Airways Avios are more valuable than the average credit card point — worth around 1.4 cents per Avio, by our estimates — which means the bonus can net you around $1,400 in airfare with British Airways.

The British Airways Travel Together Ticket is a companion pass you earn each year after spending $30,000 on the card. This is a high spend requirement that cardholders may not be able to reach, but it’s a valuable perk if you can meet the threshold. It entitles you to a complimentary ticket for your companion when you book a flight with Avios. Of course, it’s not really “free,” because British Airways is known to add huge so-called “carrier surcharges” to your award ticket, equaling up to $1,250 per ticket.

There are other restrictions as well. You have to fly round trip from the U.S., and the companion pass is only valid on British Airways. Still, the Travel Together Ticket can be a terrific value, especially for flying business or first class on a special occasion.

High APR for a rewards card

The card comes with a variable annual percentage rate that is on the high side, even for an airline rewards card. As is the case with most rewards cards, the British Airways card is not designed for cardholders with revolving balances. If you do not intend to pay off your balance each month, you would be better served by a card with a low APR.

Aside from the generous bonus and companion ticket, the card doesn’t come with any special airline perks, such as free baggage or priority boarding. Still, it does include some useful benefits, such as car rental insurance and concierge services. You’ll also get 10% off British Airways flights starting in the US. Notably, the card doesn’t charge a foreign-transaction fee. You can use the card abroad without having to pay an extra 2 to 3 percent for the convenience, and earn some extra Avios along the way.

Why get the British Airways card?

How to use the British Airways card: