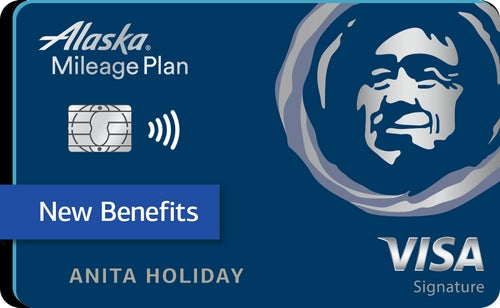 A good deal for budget-conscious West Coast residents who frequently fly Alaska Air, the Alaska Airlines Visa card pairs a generous sign-up bonus and valuable rewards program with one of the lowest APRs available on a travel card.

Alaska Airlines has a limited footprint and flies mostly in the Western U.S. But there is a reason why it has amassed a small army of devoted flyers. Alaska miles can carry you further than miles from other popular programs. The major strengths of Alaska’s MileagePlan are a great redemption scheme, generous routing rules, and a vast network of domestic and international partners.

The Alaska Airlines Visa credit card gives you an opportunity to get bonus miles for things you have to do anyway, such as paying for your airline expenses. Aside from having a better-than-average earning scheme, it also offers a generous bags allowance and a companion ticket when you meet the spending requirements.

The card is currently offering a new and improved sign-up bonus offer of 70,000 miles and Alaska’s Famous Companion Fare™, which lets you purchase one round-trip coach companion fare from $122 ($99 fare plus taxes and fees from $23). To qualify, you’ll need to spend $3,000 with the card in your first 90 days. This bonus is up 20,000 miles versus the card’s last offer, which gave you 50,000 miles and the companion fare after $2,000 in spending, so now is a great time to apply if you’ve been on the fence.

Considering how much an Alaska airlines ticket can run (for example, over $500 if you choose a route to Hawaii), the companion fare value alone is a terrific value. That’s not even factoring in the 70,000 bonus points, which can can be worth around $770 based on the latest valuations from Bankrate (1.1 cents per point).

Just like many other airlines, Alaska offers a yearly benefit of a discounted companion fare with a paid ticket each year on your account anniversary. The fare is valid for any Alaska flight booked on alaskaair.com, there are no fuel surcharges and all fare brackets qualify.

If you spend $6,000 or more on purchases within the prior anniversary year, you can get a discounted fare for a companion starting at $122. And the redemption is painless – you simply apply the discount code at the time you purchase the primary ticket.

Alaska Airlines primarily serves the West Coast. However, even if you don’t live on the West Coast, you may still find Alaska’s rewards program valuable, thanks to Alaska’s vast partner airline network. You can use Alaska miles on American Airlines, Delta Air Lines, Cathay Pacific, Emirates, British Airways, and many other airlines. Most of these airlines do not make you pay fuel or other carrier surcharges. The award levels are usually quite reasonable, and Alaska rules allow a free stopover – even on a one-way trip. That means two stopovers per round trip – more travel for your miles.

The Alaska Airlines card entitles the cardholder and up to six people traveling on the same reservation to one free checked bag each. On top of this valuable perk, the card comes with a slew of Visa Signature benefits, including car rental insurance, lost luggage reimbursement and concierge services.

Why get the Alaska Airlines card?

How to use the Alaska Airlines card: