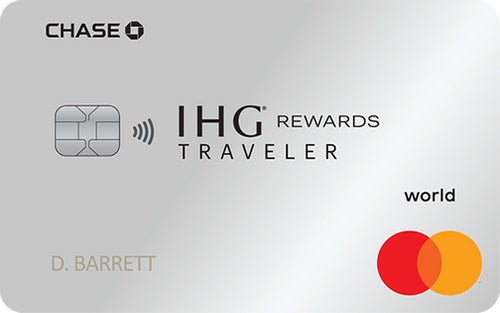 The IHG Rewards Traveler card is a decent card for IHG loyalists, but it doesn’t offer much in the way of perks.

The IHG Rewards Traveler card recent had its sign-up bonus reduced, and while it still offers decent value for a no-annual-fee card bonus, the change will likely make the card less appealing if you’re hoping for a big influx of points in the near future. New cardholders can earn 80,000 bonus points after spending $2,000 in the first three months – a significant drop from the card’s previous offer of 120,000 bonus points with the same spending requirement.

We value IHG points at around 0.55 cents apiece, so we estimate 80,000 points are worth around $440 in IHG stays. While this falls far short of the value you’ll find on the higher-tier IHG Premier card (140,000 points after spending $3,000 in your first three months, which we estimate is worth a total of up to $770 in IHG stays), it’s still pretty impressive given the card charges no annual fee.

Unfortunately, IHG points are not worth as much as the average rewards point. When redeemed for reward nights, we value IHG points at around 0.55 cents per dollar. So while the 80,000-point sign-up bonus and up to 17-points-per-dollar total IHG stay rewards rate sound impressive, they are actually worth less than similar rewards cards.

IHG has plenty of available properties, with more than 5,600 locations. While not quite as large as networks like Hilton or Marriott, IHG still has hotels in cities around the world – ranging from midlevel hotels to luxury resorts. No matter your budget, IHG Rewards cardholders can find a property that meets their needs.

You can still earn plenty of hotel rewards points at a decent rate with the IHG Rewards Traveler card, but frequent travelers who can take advantage of extra perks are better off biting the bullet and paying an annual fee for the IHG Premier card.

Why get the IHG Rewards Traveler card?

How to use the IHG Rewards Traveler card?