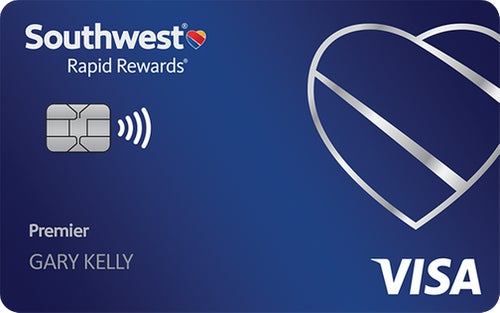 If you frequently fly Southwest, it’s worth upgrading to this high-value airline card, despite its $99 annual fee. It offers one of the best sign-up bonuses on the market and its rewards points are worth substantially more than the average credit card rewards point.

The Southwest Rapid Rewards Premier card offers a solid sign-up bonus, especially for an airline card: You’ll earn a Companion Pass (through Feb. 28, 2022) plus 30,000 points after you spend $5,000 on purchases in the first three months of ownership. One of the most sought-after perks in all of rewards travel, the Companion Pass lets you designated a “companion” who will fly free with you for up to two years on every flight you book with cash or miles.

The Companion Pass is popular because, like we said, you can add your companion for free whether you pay for your own flight with money or points. Just remember that your companion does have to pay government-mandated taxes and fees on their fare, and that you can only change your companion up to three times per year.

The Southwest Premier card offers an earning structure that is easy to understand. You’ll earn 2 points per dollar on Southwest Airlines purchases plus purchases made with their hotel and rental car partners. You also earn 1 point per dollar on everything else you buy.

Not only can you earn Southwest Airlines’ very popular companion pass as part of your sign-up bonus by spending $5,000 on purchases in the first 3 months, but you can also score the coveted perk on an ongoing basis by earning 125,000 Rapid Rewards points or taking 100 qualifying flights in one year.

This card gives you the same sign-up bonus as well as the same earning rate on Southwest purchases. However, you also get an annual $75 travel credit on Southwest, four upgraded boarding positions each year, 20 percent back on in-flight purchases, 7,500 points on your cardmember anniversary each year and no foreign transaction fees. Though it comes with a higher $149 annual fee, the value of these extra benefits outweighs the fee, for those who fly Southwest frequently enough to take advantage of them.

The Chase Sapphire Reserve is a smart travel credit card to pick up – even if you also get a co-branded Southwest credit card. This card gives you 50,000 points after you spend $4,000 within three months of account opening. You also earn 3 points per dollar on travel and dining and 1 point per dollar on all other purchases.

The United Explorer Card gives you 2 miles per dollar on United Airlines purchases and 1 mile per dollar on everything else. Other perks to look forward to include up to a $100 Global Entry or TSA Precheck credit and a free checked bag for you and a companion when you fly with the airline. There’s a $95 annual fee, but it’s waived the first year.